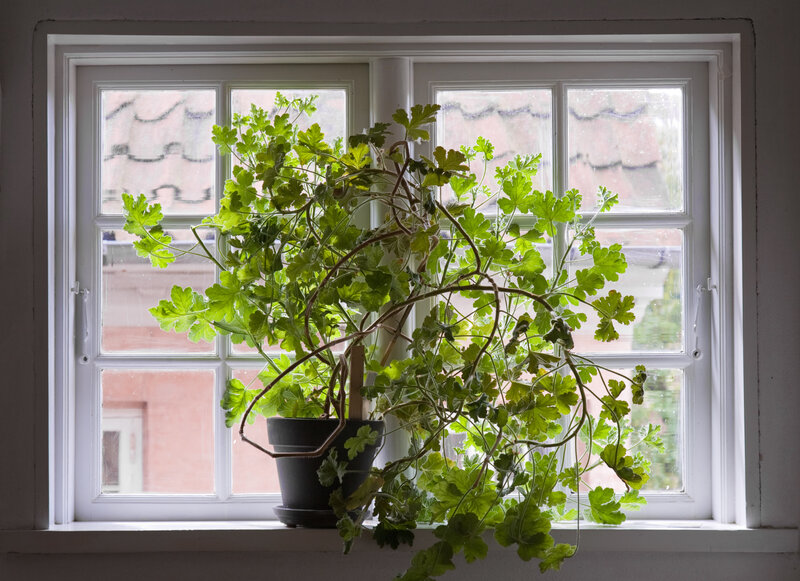 When we visit Bay Area homes to provide estimates, we are repeatedly confronted with a series of “frequently asked questions,” many of which are geared towards window film myths. For example, many people believe that window film and your houseplants are a bad mix when, in fact, window film can actually support healthier indoor plant growth.

Window film installation has multiple benefits for homes and businesses, and we hate to hear that misinformation keeps home and business owners from making a sound investment and building improvement decisions.

So, let’s put five of the most common window film myths to rest, starting with the one about the relationship between window film and your houseplants.

This may be true if you buy the cheap kind. Cheap, DIY window tinting is like cheap gas station sunglasses – the tinting isn’t engineered to do the job right. All it does is dim the sunlight that comes in – but it doesn’t balance the allowance/blockage of healthy and unhealthy light.

Professional window film is a whole different story. We recommend reading The Science Behind Window Tinting for a detailed description. While window film does block harmful UV rays, it allows the blue and red light spectrums to come through. These are the spectrums of light plants use to grow. Plants are as susceptible to UV rays as people. Have you ever had a plant burned/scorched in direct sunlight? That was the result of overexposure to UV rays.

Rather than harm houseplants, tinted window films can support healthier plant growth. Many of the plants we grow indoors are native to rainforests, which means they have ample access to dapped – rather than direct – sunlight. When you cover a home or business’s windows with professional window film, you cultivate the same lightscape – lots of access to indirect sunlight (daylighting) without harmful UV exposure.

If you’re concerned about the effect of tinted window film on your houseplants, speak to your local nursery about it and see what they say. In our experience, most houseplants thrive with window film

Myth 2. Our house or office will be too dark

Again, window film is designed to block UV light, a harmful light spectrum. It allows the healthy sunlight spectrum to come in (unless you’ve intentionally ordered darker window tinting). So, for most homes and offices, window film application means all of the benefits of daylighting and reduced electricity bills without any glare or faded furnishings.

That said, professional window installers evaluate the building and the surrounding features and make recommendations accordingly. For example, we might recommend a stronger level of tinting on windows with direct southern or western exposure while choosing a lighter shade of tinting for the north- and eastern-exposed windows.

Myth 3. You can’t clean your windows the same after window film

Like all home features, window film design and manufacturing processes are improved year after year. And, as you can imagine, higher-quality window films are far more durable than their cheap counterparts. That said, windows can be cleaned (and should be) after they are covered with window film. The key is never to use abrasive cleaners or cloths – the same cleaning recommendation for windows that don’t have film.

When your window film is installed by the pros, they’ll provide you with specific cleaning instructions, which include the use of warm, gently soapy water and a clean, soft (preferably microfiber) cloth.

Read, How to Clean Windows That Have Solar Window Film, for more specific cleaning details.

So many of the myths associated with window film and window tinting products come down to the theme of quality: quality of products and quality of installation.

It is true that cheap window film products and unprofessional installation can result in window film that is bubbled, cracks easily, or begins peeling away from the edges. Poor-quality products also discolor or pull away from the surface, flaking or peeling over time.

The best window film products have warranties that are backed by well-respected window film manufacturers and licensed. Professional window film installers offer their versions of labor warranties and product guarantees.

Myth 5. Window film can crack or break your windows

There is a relationship between thermal stress (significant changes in the window glass from hot to cold or cold to hot) and window breakage. However, this is not risky if you work with a professional window film installer. When we come to your home or business, we’ll verify your window manufacturer and their specification. With that information, we can match your window film products accordingly without any risk of the film cracking, breaking, or damaging your windows in any way.

Have questions or concerns about tinted window film and how it might affect your houseplants, interior lighting, or window function? Contact us here at Daystar Window Tinting.