It’s hard to imagine the thoughts and fears that raced through the minds of Chelyabinsk residents when the nearly 10-ton meteor shot by their small town. The bright lights, loud noise, and the shock-wave accompanying its passing must have seemed like an act of war or terror. The unfortunate results of the fireball are the thousands of individuals wounded by shattered glass, and the cleanup that is now taking place. This is an example of the unpredictable consequence of natural disasters, which make security window film such a good investment for residential and commercial properties. 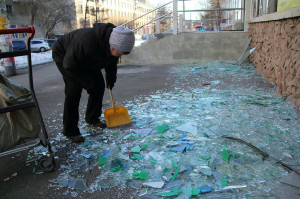 Photo from the Baltimore Sun

Is Your Home or Business Prepared for the Next Glass Shattering Disaster?

Experts say small meteorite attacks occur every year. Fortunately for humans, most of the planet’s surface is uninhabited and we are rarely affected in the way the Chelyabinsk community was on February 15. The problem is smaller meteorites and their strike zones aren’t able to be accurately predicted. As such, you never know when our area could be next.

Security Film Could Have Protected the Victims of the Meteorite Strike

There are three ways safety and security window film products could have made a difference in the recent meteorite disaster:

Those of us who have lived in the Bay Area for any length of time know that it’s not a matter of IF but, rather, a matter of WHEN there will be another earthquake. In our industry, window glass damage from earthquakes is one of the number one reasons we suggest that homeowners and business owners alike install security window film. The outcome of a natural disaster, such as an earthquake or gale-force winds, are rarely predictable so preparation can be the key to remaining safe, protecting the ones you love, securing your possessions, and simplifying the cleanup process.

While we don’t expect to become the victims of a meteorite strike anytime soon, one thing is for certain; the devastation from Russia’s recent meteorite event is proof that you can never be too prepared. Contact Daystar Window Tinting Inc. and make an appointment for a free consultation. We’ll make sure your home and/or business is protected from the next natural disaster.