One Way Glass Film for Commercial or Residential Applications

One way glass film is a type of privacy window film that can be used to prevent those on one side of a window from being able to see through to the other side of the window. This type of privacy window film is commonly used for both residential and commercial applications to gain privacy from the outside world. However, it can also be used internally for offices, warehouses, and other commercial applications to create a one way glass film between offices, waiting rooms, conference rooms, or interview bays.

Privacy is created one of two ways. Either the film uses heavy tinting, which creates an dark, opaque view for the observer, or it uses a mirrored effect so the outside viewer sees a mirrored reflection. Privacy window film is engineered so the observer’s view is obstructed but the interior occupants of a home or business will still have an unhampered view outside, and will still benefit from natural day lighting.

One way window films are designed using vaporized metal layers that are laminated with a scratch-resistant layer. They are easy to clean and resistant to damage. However, should a film become scratched or etched via vandalism, they are much easier and cheaper to replace than a new window.

In addition to privacy, these mirrored or darkly tinted window films are also extremely energy efficient, blocking up to 99% of the sun’s UV rays. This mitigates solar heat gain considerably, which can drastically reduce your annual cooling costs. 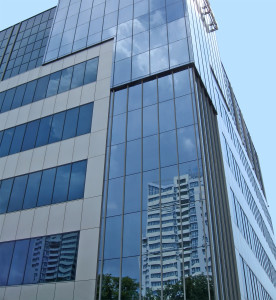 Some of the uses of one ways glass film include:

Exterior residential windows. If your home is in an exposed location or borders a busy street, privacy window film will prevent passersby or neighbors from gaining a clear view into your home. This can be especially important for bedrooms and bathrooms.

Exterior commercial windows. Businesses with large glass facades often use some type of privacy film to keep views of the interior of the building obscured from the public. In most cases, our commercial clients choose mirrored window film for a sleek, modern appearance. You can also have your privacy film imprinted with your company’s logo, contact information, or colorful geometric patterns for added aesthetic appeal.

Internal windows. Use mirrored or tinted window film in offices, board rooms, or waiting rooms. In a small space, the one way film will give your employees a sense of spaciousness, by providing them with a view through the window, while preventing customers and clients from seeing into the office spaces. They are also useful in board rooms, executive office suites, and interview bays.

If you are interested in learning more about the benefits of one way window film for your home or business, please contact Daystar Window Tinting Inc.. We’ve provided high-quality window film installation and service to the Bay Area’s  homes and businesses for over 30 years.